VAPOR BARRIER: (1) A membrane, coating, or other material that has very low water vapor transmission rates. (2) A component within a building assembly used to limit the transmission of water vapor by diffusion. Note: The term vapor barrier is imprecise and the term VAPOR RETARDER is generally preferred. (See also VAPOR RETARDER.)

VAPOR PRESSURE: The portion of atmospheric pressure contributed by water vapor; an indicator of absolute humidity. Units are kPa (in Hg).

VAPOR RETARDER: A vapor retarder is a component of the building enclosure used to control moisture diffusion through the component or assembly. It is generally placed at the warm side of the enclosure assembly to control condensation within the assembly. In terms of the International Model Building Codes, there are three classes of vapor retarders used in building enclosures, categorized as follows, based on the measured water vapor transmission per ASTM E 96 dry-cup or desiccant method A. Class I: less than 0.1 perms, for example, a 6 mil polyethylene sheet. Class II: greater than 0.1 perms but less than or equal to 1.0 perms. Class II vapor retarders are generally required in colder climates; check with the local building code. Examples of Class II vapor retarders include asphalt-kraft facings, ~2 inches of medium-density SPF. Class III: greater than 1.0 perms but less than or equal to 10 perms.

VERGE OF POPCORN SURFACE TEXTURE: The verge of popcorn surface is the roughest texture suitable for receiving the protective coating. The surface shows a texture where nodules are larger than valleys, with the valleys relatively curved. The surface is considered undesirable due to the additional amount of coating required to protect the surface. This surface requires at least 50% additional material to the theoretical amount. (See SPFA-145, “Surface Texture of Spray Polyurethane Foam.”)

VISCOSITY: The thickness or resistance to flow of a liquid. Viscosity generally decreases as temperature increases. 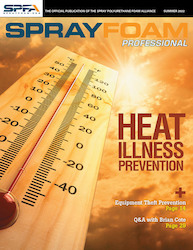