TACK-FREE: A curing phase of polyurethane foam wherein the material is no longer sticky.

TACK-FREE TIME: The time between the start of mixing the two SPF-forming components and the time that the surface of the foam can be touched with a wooden stick without it sticking.

TEAR STRENGTH: The maximum force required to tear a specimen, the force acting substantially parallel to the major axis of the test specimen. Values reported as a stress per unit of thickness.

TENSILE STRENGTH: The tensile (pulling or stretching) force necessary to rupture a material sample divided by the sample’s original cross sectional area. Units are usually kPa or psi or lb/in2.

TERMINATION: The treatment or method of anchoring and/or sealing the free edges of the membrane in roofing or waterproofing system.

THERMAL BARRIER: A material applied over spray polyurethane foam (and other foam plastics) designed to slow the temperature rise of the foam during a fire situation and delay its involvement in the fire. With certain exceptions, building codes require that SPF be separated from interior spaces with a thermal barrier. Building codes define thermal barriers as those specifically listed in the code (such as ½-inch gypsum wallboard) or those tested in accordance with NFPA 275 (meeting both the Temperature Transmission Fire Test and the Integrity Fire Test).

THERMAL BRIDGE: A thermally conductive material that penetrates or bypasses an insulation system such as a metal fastener or stud.

THERMAL CONDUCTANCE (C): A unit of heat flow that is used for a specific thickness of material or for materials of composite construction, such as laminated insulation. C=k/thickness. Units are W/m2•°K (Btu/hr•ft2•°F).

THERMAL CONDUCTIVITY (k): The heat energy that will be transmitted by conduction through 1 sq. ft of 1 in. thick homogeneous material in 1 hr when there is a difference of 1 degree Fahrenheit perpendicularly across the two surfaces of the material. Units are W/m•°K (Btu•in/hr•ft2•°F).

THERMAL MOVEMENT: Changes in the dimension of a material as a result of temperature changes.

THERMOPLASTIC: A polymer that softens and/or melts when heated. Polystyrene is an example of a thermoplastic material.

THERMOSET: A polymer that irreversibly cures to its finished state through a catalytic reaction. Unlike thermoplastic foam, a thermoset foam cannot be melted. Polyurethane spray foam and polyisocyanurate board foam are examples of thermoset materials.

THINNER: A liquid used to reduce the viscosity of coatings or mastics. Thinners evaporate during the curing process. Thinners may be used as solvents for cleanup of equipment.

THIXOTROPIC: Having the property of decreasing viscosity with increasing shear stress. A coating is thixotropic if it thins with stirring or pumping, but thickens again when movement ceases.

TIE-IN LINES: The starting or stopping point at which new foam is applied to foam that had been sprayed earlier.

TINT: A color produced by the introduction of small amounts of a colored pigment.

TOXICITY: The quality, property, or degree of being poisonous or toxic.

TRANSITION MATERIAL: A material (typically a tape or membrane) or a combination of materials used between adjacent building-envelope components to provide continuity for an air barrier or water resistive barrier assembly.

TWO-COMPONENT SYSTEM: A coating or polyurethane foam formed by the mixing and the reaction of two different materials. 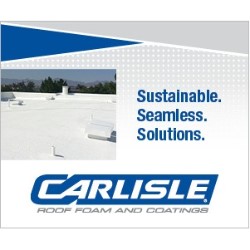