FAST-SET: A term applied to a coating to indicate a faster curing time versus a standard version of the generic coating. In polyurethane and polyurea coatings, this is generally indicative of cure times in the range of a few seconds to a few minutes, or coatings that must be sprayed with plural component equipment. In acrylic coatings, this is generally indicative of a 1–3 hour cure schedule versus a 2–5 hour cure schedule at 75°F.

FEATHERED EDGE: The thin tapered outside edge of a polyurethane foam pass.

FERROUS METAL: An iron compound (i.e., steel, cast iron, or galvanized steel). As a rule of thumb, most ferrous metals are magnetic.

FIRE RESISTANCE: The inherent capability of a building assembly or an element of construction to resist the passage of heat, smoke, and flame; and/or to maintain structural integrity for a specified time during a fire. Usually measured by ASTM E 119.

FIREBLOCKING: Building materials or constructions designed, approved, and installed to resist the free passage of flame to other areas of the building through concealed spaces.

FIRESTOP: A material, device, or construction, installed to resist for a prescribed time period, the passage of flame and heat through openings in a protective membrane in order to accommodate cables, cable trays, conduit, tubing, pipes, or similar items.

FISHEYE: A coating defect that manifests itself by the separation of the wet coating into a recognized pattern resembling small “dimples” or “fish eyes.”

FISHMOUTH: Also referred to as an “edge wrinkle.” A half-cylindrical or half-conical shaped opening or void in a lapped edge or seam, usually caused by wrinkling or shifting of ply sheets during installation. In shingles, a half-conical opening formed at a cut edge.

FLAME RETARDANT: A substance that is added to a coating or polyurethane foam formulation to reduce or retard its tendency to burn.

FLAMMABILITY: Relative ability of a material to support combustion as expressed by its flash point.

FLASH COAT: A thin initial pass of a spray-applied material.

FLASH-IGNITION TEMPERATURE: The lowest temperature of a material required to initiate combustion in the presence of a spark or flame.

FLASHOVER: (1) A fire condition wherein gasses are ignited at the ceiling level of a room. (2) One of several measurements that are used to determine the threshold at which a fire test is terminated. Flashover can be a visual observation of flames exiting the structure or a measured heat flux or temperature limit.

FLASHPOINT: The lowest temperature of a material at which it gives off vapors sufficient to form an ignitable mixture with air near its surface.

FLASHING: The portion of a roof system used to waterproof at terminations or vertical surfaces.

FLUOROCARBONS: A chemical that contains both a carbon and a fluorine atom in its structure. They are traditionally used as physical blowing agents for polyurethane foam products. There are three common classes of these materials used as blowing agents: CFC, HCFC, and HFC. (See also CFC; HCFC; HFC.)

FLUTES: The grooves in the lower section of metal decking that give it added strength.

FM APPROVALS: A division of FM Global (formerly Factory Mutual or FM) that certifies industrial and commercial products and services as meeting its established safety standards for insurance rating purposes, and which publishes such certifications in its Approval Guide.

FOAM STOP: The roof edge treatment upon which polyurethane foam is terminated.

FREEZE-THAW CYCLE: The freezing and subsequent thawing of material.

FRIABILITY: The tendency of a material or product to crumble or break into small pieces easily. 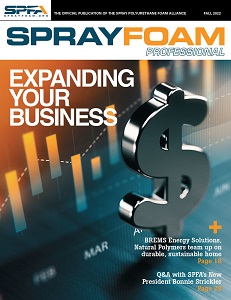