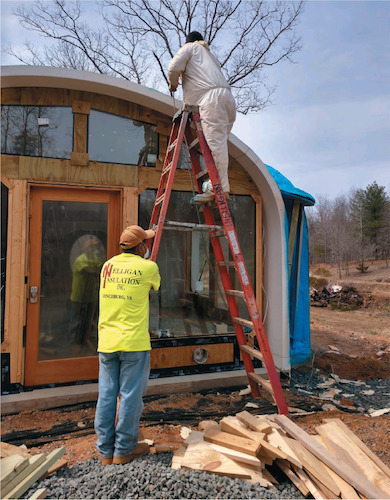 The Hobbit House at White Lotus Eco Spa Retreat was made especially for vacationers who yearn to reconnect with nature – literally.
This isn’t your typical cabin in the woods. It was built into a hillside and sits mostly underground, with multiple doors and windows located on the side of the building facing away from the hill. Dirt moved during the construction process was deposited on top of the building to create a roof made of vegetation and grass.

"You’ll be walking alongside the hill and won’t even know it’s there until you’re right on top of it," said Bobby Paris, project manager for Nelligan Insulation, the Lynchburg, Va.-based SPFA member hired to work on the project. "It’s just something you don’t see every day."
The same thing can be said about most of the buildings at the White Lotus retreat in Stanardsville, Va., close to Shenandoah National Park. Situated on 25 acres of forests and ponds, the retreat has a number of multistory, ornate tree houses, barns and cabins with suites for visitors to rent out and common areas such as a movie theater, bar, meeting room, meditation room, massage studio, yoga studio and outdoor patio with a fireplace. It just might be the ultimate setting in which to unwind.

In February 2019, Nelligan was hired to install SPF to insulate and waterproof the Hobbit House, a 2,000-squarefoot, dome-like structure with an outer shell made of fiberglass, like the material used for the hull of a speedboat. Waterproofing the structure was the No. 1 goal, Paris said, given that the building is essentially buried underground.

The one-week job would require a three-man crew, with Paris working alongside sprayers and helpers Jose Manzanares and Mario Lopez. Before installing SPF, the crew sealed the flanges where the outer shell pieces were connected to create the curved sides of the dome. The flanges were sealed with Henry Blueskin material.

Initially, Nelligan Insulation tried spray-foaming the flanges without sealing them with Henry Blueskin, but the structure took in water during a rainy day, so the crew quickly realized that it must seal the flanges and install foam on top of them to create a waterproof seal.

Next, Nelligan used a Graco Reactor E-30 foam proportioner and a GPX 1250 airless paint sprayer to apply four inches of Icynene Pro Seal to the outer shell, spraying in two-inch passes. That closed-cell foam was used mainly to provide insulation, and the product meets FEMA criteria for resisting bulk water, making it ideal for use in areas prone to flooding and hurricanes, Paris said.

On top of that layer, Nelligan sprayed two inches of Lapolla FOAM-LOK 2800-4G. That two-component, closed-cell foam system was specifically designed to provide a high-performance, lightweight roofing system for use over a wide variety of roof-deck construction and configurations, Paris said.

The architect’s original plans called for six inches of Icynene Pro Seal, but after Nelligan educated the firm about higher-density SPFs made for commercial roofing and waterproofing, the decision was made to switch to a hybrid approach of Pro Seal and Lapolla FOAMLOK 2800-4G.
Lastly, the crew applied the coating product Blue Max, a blend of liquid rubber used primarily to waterproof basements. Blue Max helps prevent mold and mildew on under layment, wood, foundations and concrete. It’s a strong, highly adhesive elastomeric waterproof sealant paint for high-moisture settings such as below-grade foundations, basement walls and cisterns.

The entire exterior of the building, except for the doors and windows, is covered with this three-layer combination of SPF and coating.
"This project is the first opportunity the Nelligan Insulation team has had to use the Blue Max product because we are used to installing UV coating material," Paris said. "Given Blue Max’s high waterproofing qualities, the team decided it was the right product to seal the foam and prep it for being buried."

To keep workers safe, whenever the crew was working toward the edges of the structure, sprayers were required to either spray from the ground or were tied off using fall protection from the top of the building. In stallers wore safety harnesses, used inspected ladders and scaffolding and wore high-visibility clothing, and the sprayer and helper wore respirators in the immediate sprayinstall area.
Paris said the job presented relatively few challenges, but due to the cold February weather, the crew had to wait until the afternoon to start spraying.

"It was important to wait until the sun came up for the substrate to warm up and the material to be able to meet proper temperatures to create good, quality foam," Paris said. "Overall, the project was simple and straightforward, with a few nuances. While the property is not particularly expansive, either in square footage or height, it was difficult to spray given its curved design. The team is accustomed to spraying linear lines within 90-degree angles, and the property doesn’t contain any 90-degree angles."
Paris said the Hobbit House requires minimal heating and cooling because of SPF application and the insulating properties of the dirt and vegetation that envelope the building. Additionally, building the exterior of the home required relatively few building materials. New construction typically means gutters, cladding, exterior paint and more, but none of these materials was needed for the Hobbit House, which will reduce maintenance costs over time.

"The carbon footprint of The Hobbit House is minimal because of the high energy efficiency of the property," Paris said. "The continuous insulation, in combination with the grass exterior, makes for an airtight seal and high R-value. The doors and windows are isolated to one side of the building structure. The result is a home that far surpasses the energy efficiency of a traditional new-construction home because the air infiltration is extremely isolated."